Oh, You’re That Guy – The Life of The Party 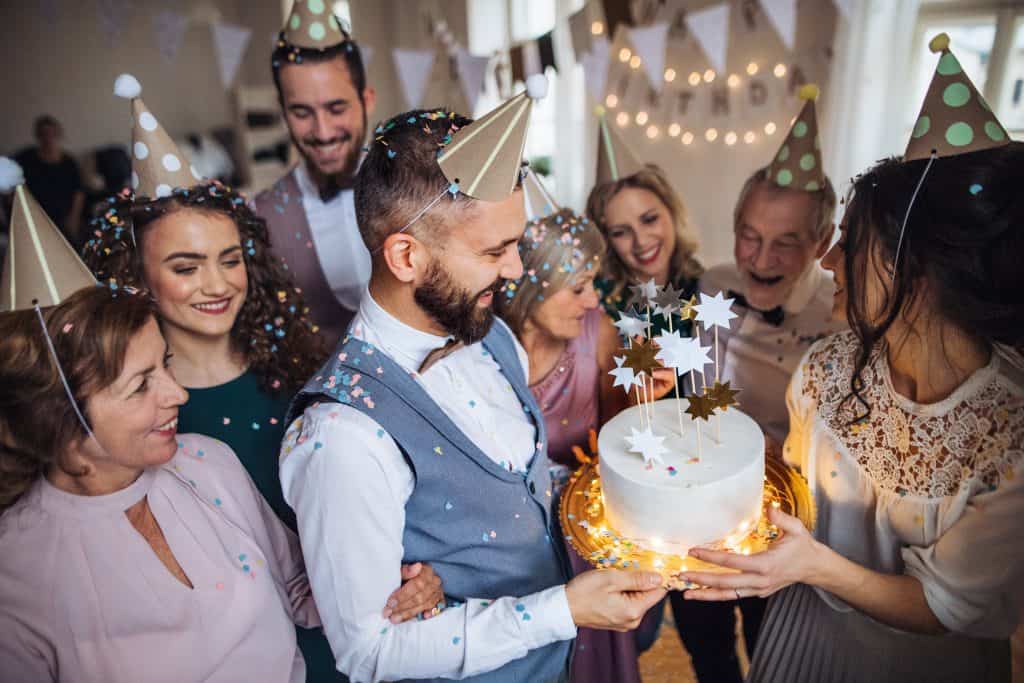 The other night my wife and I surprised a friend for his 40th Birthday along with his many other friends whom we had never met.

Everything was going swimmingly.

I happened to easily win the “Hip Breaker” game in 6 rounds, beating all the men and then the final female contestant (you know that game where they put 6 ping pong balls in a Kleenex box, tie it around your waist, and dance to 90’s rap classics such as “I Like Big Butts and I Cannot Lie”).

I won the games so easily everyone was like who the heck is this guy?

What do you do for a living?

We tried to keep it under wraps that I’ve taught that game at many corporate events through the years and have the technique down to the point I can get every ping pong ball out in one bounce of my booty (an old Ricky Martin trick I learned in my Vegas days…hahahahah).

As the night wore on, eventually someone realized they had seen a video of me when we were playing charades and I did a llama impression and freaked everyone out with my facial movements.

Next thing we know the entire party turned to focusing on me, as every person in their own time and place, over the past 18 years, realized they had seen me either at an event, as a speaker, entertainer, on video, on YouTube or Dry Bar Comedy, and elsewhere.

One couple had even sat and watched my videos for an hour with their kids the Sunday prior and didn’t realize it was me.

My buddy, who’s birthday it was thought it was funny everyone picked up on who I am, he didn’t mind, but when people began asking for selfies and to have me get up and perform that turns into my worst nightmare.

You see it isn’t that I don’t want to entertain anyone anywhere at anytime, but there is a time and a place.

Especially at a party highlighting a friend, I don’t want the spotlight to fall on me.

For example, if I go to a party and realize someone is a famous doctor I don’t say, “Hey, you’re a Doctor!?  Awesome.  Can you look at this mole, it’s gone from brown to black over the past few months…”

My wife and I graciously packed up our things, gave hugs, apologized I couldn’t perform tonight since we had to go, and got out of there.

Some people may wonder why I wouldn’t grab the mic and just be ok with being the life of every party.

I understand the confusion, as it is quite flattering to be recognized and then asked to do what you’re known for.

However, in my past 2 decades I have found it to be quite offensive when I am TOLD to perform while attending a party just because someone finds out what I do.

I will never forget being invited years ago to a very prestigious party with my wife over the holidays.  Very important people were there – wealthy, political figures, legends of business, it was the Who’s Who of parties.

I sat enjoying my meal, cutting into my steak, conversing with the folks at my table.

Eventually the host, a friend of mine, announced, “Well, since we have everyone here I wanted to let you all know we have a special treat tonight.  One of the great Entertainers of the World lives in our State…”

I looked around thinking, “Wow, is Donny Osmond here?”

And he continued, “So we haven’t planned this, but we’d like to invite Jason Hewlett up to perform for us for the next 30 minutes.”

I was stunned.  Had nothing planned.  No sound system, no iPod for doing my music and tracks, no stories or comedy prepared.

I awkwardly stood up and winged about 10 minutes worth of all I could do without a mic for a room of 200 people clamoring to see.

I then announced that’s all I could do, grabbed my wife and jacket and ran out the door, never to attend that party again, even being invited back year after year.

The point is twofold:

What would you do in this situation?

Perhaps you’re at a place of peace that says, “Sure, I’m happy to perform if asked at any place and time.”

Or maybe you’re at a place of resolution that says, “No, I don’t do that sort of thing without being prepared and paid.”

Question is: Are you prepared to do whatever you’ve promised yourself you’ll do when that situation arises?

The Promise: Become a Legendary Leader and discover your Signature Moves

Ready to become a Professional Speaker?  Let Jason show you how click here