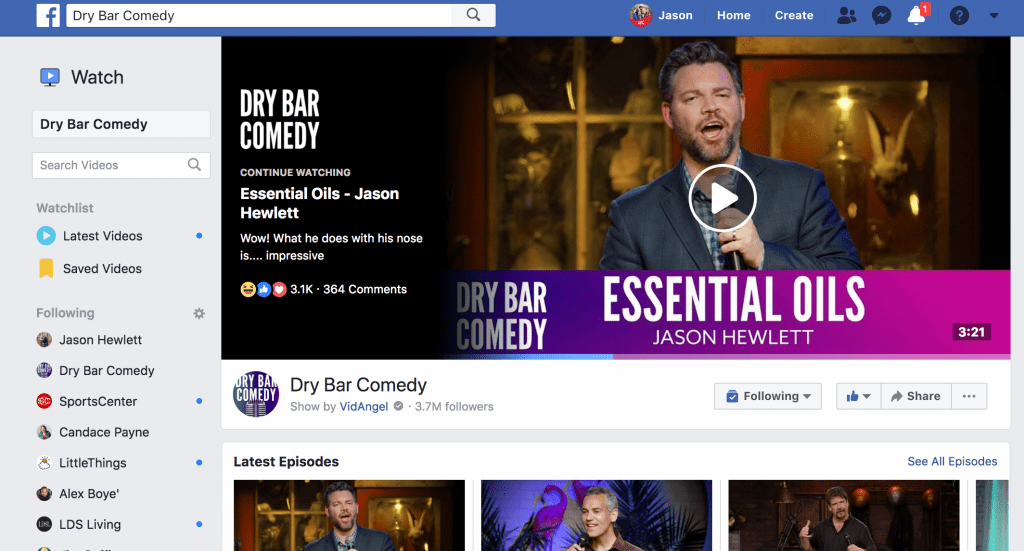 One week ago today, Dry Bar Comedy, a division of VidAngel specializing in clean comedy, added my “Essential Oils” video to their viral video formula.

My special, “Father Time”, was recorded in April 2017 in Provo, UT at their studios in front of a live audience over two evening shows.

It has sold a little here and there with the original format, as Dry Bar has gone in the path of HBO and Netflix with the comedy specials route, offering a 40-minute format with comedians you haven’t heard of yet, and asking for a donation once you’ve enjoyed the presentation.

As one of the original Season 1 participants of the platform, my special saw little action, and it doesn’t help that I am not a traditional stand-up comic who tells jokes, rather I’m doing story form comedy mixed with musical impressions and voices, which presents a copyright nightmare unless I do parody.

My special didn’t really get off the ground.  My videos weren’t made for Facebook clip-ready.  So they sat dormant while I watched every other comedian, no-name, semi-headliner, and a few actual headliners, being utilized in Dry Bar’s rotation online of shared videos.

Sometime in the past 8-10 months Dry Bar figured out the formula for making their 3 minute videos from each special go pretty much viral.  As in, overnight comedians I had never heard of were suddenly having videos in the 5-10 Million watch count, and going from a low draw comedy club headliner, to a top draw, “As seen on Dry Bar Comedy” badge of honor.

I was stunned by how great the snippets were, and wished and prayed any of mine would ever be used.

I sat and watched comedian after comedian become not necessarily a household name, but rather have instant Facebook fame, credibility, and be recognizable by face or bit.

It was frustrating to me, to say the least, as I felt passed over and left in the dust.

I knew my special was literally “special”, it was different and unique, not typical in any way, and I just hoped at some point they might need to dig deep enough in the bottom of the barrel to share one of my videos.

And then, last Thursday, I woke up having been tagged in a video.

Dry Bar had taken a bit and routine I threw into my special last minute, at the encouragement of my brother, about the “Essential Oils” our family have used for decades (and now I use them to get the leg pains of my children screaming in the night to go away).

I watched this very second-rate bit, something I might place about 20th on my list of best segments from that 40-minute “Father Time” Special, go Facebook viral within 60 hours of being posted, racking up 1 Million views.

Even 6 hours into their posting it already had 300,000 views, which was more than my previous 10 most highly viewed YouTube uploads of my entire career.  I posted this situation in realtime as I watched with my FB peers, who seemed as stunned as me. 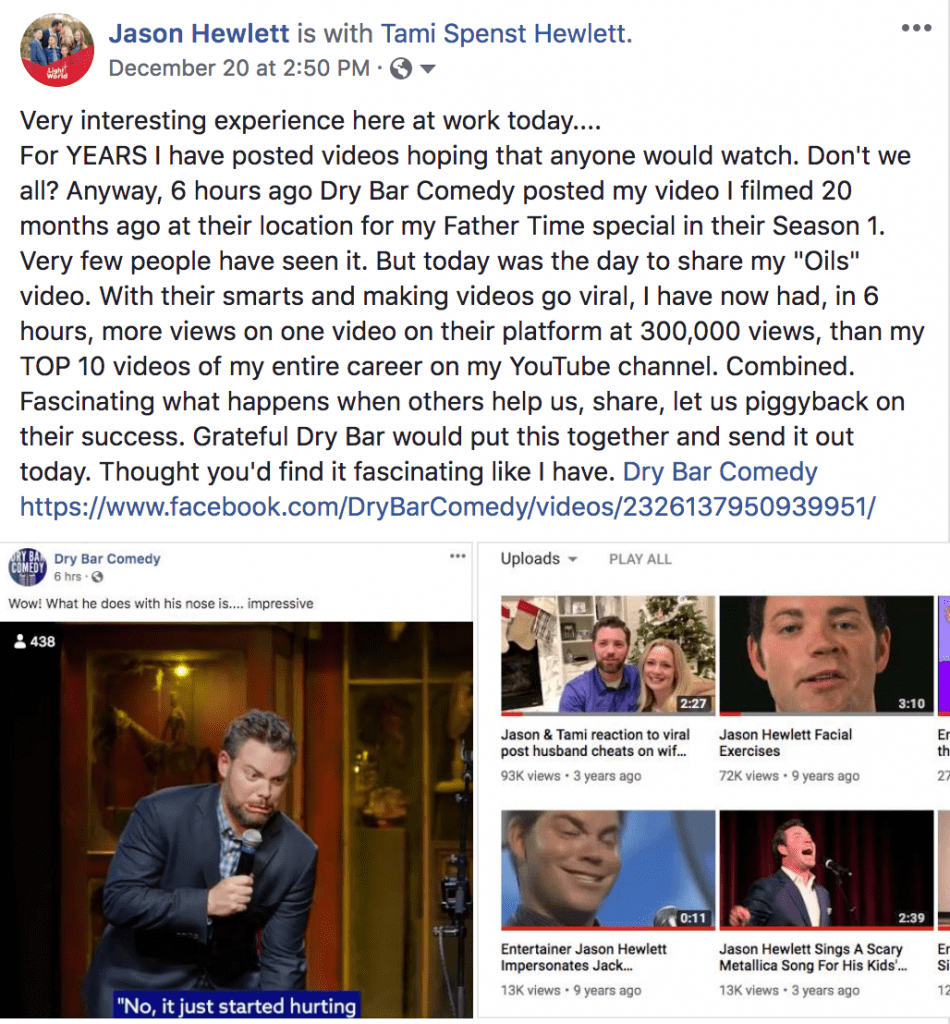 I sat and watched, shared, commented, and rode the wave.

It was fun, exciting, and I knew it would only last for a moment.

When you’ve gone viral before you kind of have to just enjoy what’s happening, as it will be over very soon, and the joy the viral segment brings will soon be vilified in one way or another by the haters after the love has worn off (just go take a gander at the comments I’m getting on the oils video, enough to make you want to jump off a cliff).

Perhaps you have watched others around you, with less ability, talent, marketing strategy, not as good as a speech or show as you, completely fly past you in the realm of publicity, acknowledgement, praise and success.

It is hard to feel happy for them.  I admit that as a guy who is everyone’s natural cheerleader and biggest fan.

Truth is, we all want to be a part of the success train, too.

But often it doesn’t come.

As I watched, over 20 months, these other performers gain notoriety and fame in certain circles, I profess with guilt I was baffled as to why my videos weren’t given the same attention by the producers, and I became sad for myself.

But I just wrote it off, figured it wasn’t meant to be, and moved on.

I felt a tinge of disappointment every time I saw a Dry Bar video in my feed racking up the views, comments, shares and likes, for I knew mine would do the same if anyone ever got to see it on their platform with their millions of followers of clean comedy.

But I just kept plugging along and doing my thing.

Writing, speaking, performing, both for money and for free, and everything in between.

When I figured it would never happen is when it all of a sudden did.

And it was exciting.

People are still telling me they’ve seen it, mostly pals of mine in the business, a few speaker friends here and there.

It will keep gaining views, but the 72 hour marathon has ridden it’s moment as far as it will go.

As you push into the New Year, and as you see others appear to be flying by you in success, power, fame, glory…I hope you’ll understand we all experience this feeling of comparison via social media (or pick your poison) in one way or the other.

And truth is this: We must move forward.  Stick to the mission and intention of why you started doing what you’re doing in the first place.  If it’s for the fame and recognition, my friend, you will often be disappointed.

Find something that really gives you the juice, the power to be proud of what you’re doing, and be happy with the level you’re at, as well as the level the people around all of us in the same business and same circles are at as well.

These are fascinatingly tough life lessons for the human in showbiz, but as much as there is to do and plan for in the New Year, I promise you this, it’s what you will let go in the New Year that will bring you the greatest sense of Joy.

P.S. Please share my video by clicking on the screen shot below when you have a moment….(laughing emoji with tears who is kidding but not really, but really) 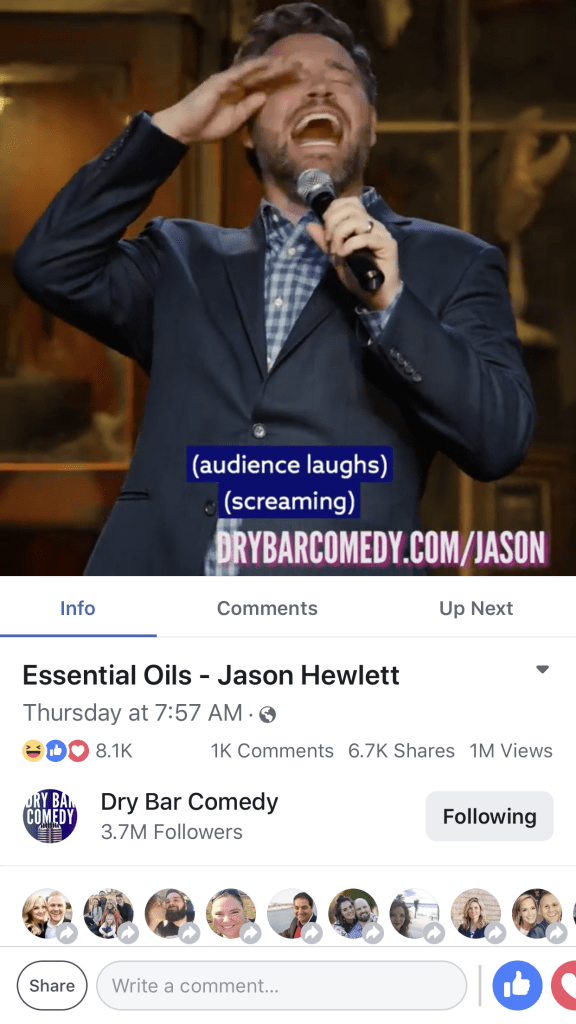 « Merry Christmas, Happy Holidays, and December Work
Getting THE SHOT »